Our all-female choir, the Songbirds, did City Academy proud going head to head against vocal groups from around the UK on the BBC’s new Saturday night show, #PitchBattle.

After five years together, being chosen to perform on national television and take centre stage on The Beebs’ prime time slot was a dream come true - and we were behind them all the way as their beautiful harmonies were broadcast to living rooms nationwide on Saturday 24 June.

We asked a couple of the lucky ladies that took part in the show, as well as their much loved MD, Katherine Hare, to take us on the journey from performing for family and friends, to being behind the scenes and on the sets of BBC 1’s Pitch Battle. 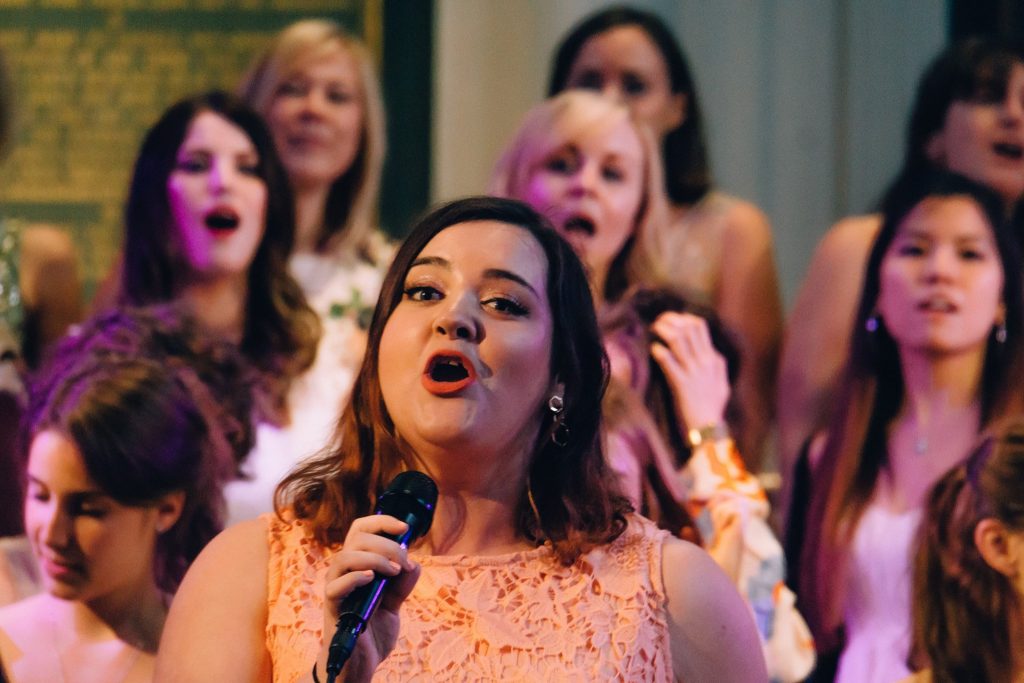 I joined the choir in March 2014 on a bit of a whim - I'd been looking for a way back into singing and performing, so a quick Google brought up City Academy. I tried a few tasters and went along to the Songbirds one - the girls were learning the The Barden Bellas number from Pitch Perfect and I was totally sold! Since then, the choir has expanded but we've also become much more of a close-knit community, so it was incredibly exciting to go on the Pitch Battle journey!

We all travelled up to Manchester together on a minibus - so it felt a little bit like a school trip - until we got there and the hard work started! The production team were incredible and made us feel so welcome and at ease, while also running a tight ship and keeping us to schedule.

It was really interesting to see the behind the scenes magic and hours of work that go into putting together those slick 30-second clips that we get to see on finished shows. From an interview, to singing on the Eros statue at Piccadilly, to being filmed laughing at a blank TV screen at Kat's house - they organised a crazy day of activities just to film our introduction snippet!

The whole thing was slightly mad and exhausting, but also so rewarding and fun! I loved meeting the groups in our heat and there was a real sense of camaraderie between everyone, even though it was a competition. And I think I can speak for all of the girls when I say that getting dolled up by the glam squad of hair, make-up and wardrobe was a total dream! A true highlight was featured on BBC Breakfast, when Mel caught us having just sung with Chaka Khan - that was a total 'pinch me' moment! We still see ourselves as a group who sing for our family and friends a couple of times a year, and now we've been on national TV! It's all rather surreal.

My personal favourite moment crops up in our ‘Riff Battle’ (one of the rounds on the show), when the girls put a huge amount of trust in me and chose me to have a pretty cool solo moment. I struggle a lot with nerves when it comes to auditioning and singing on my own, so it was a big deal and a bit of a surprise to me - I hope I did them proud!

The main change for all of us has to be getting a massive boost in confidence and performance skills, which I think shone through in our most recent concert in June. A City Academy choir is a great choice for anyone considering getting some singing in their diary - you get the benefit of hugely experienced tutors and really good performance opportunities run by a super professional team. I never could have guessed when I went along to my taster session that this is what I'd be doing three years later, so anything can happen if you take the chance! 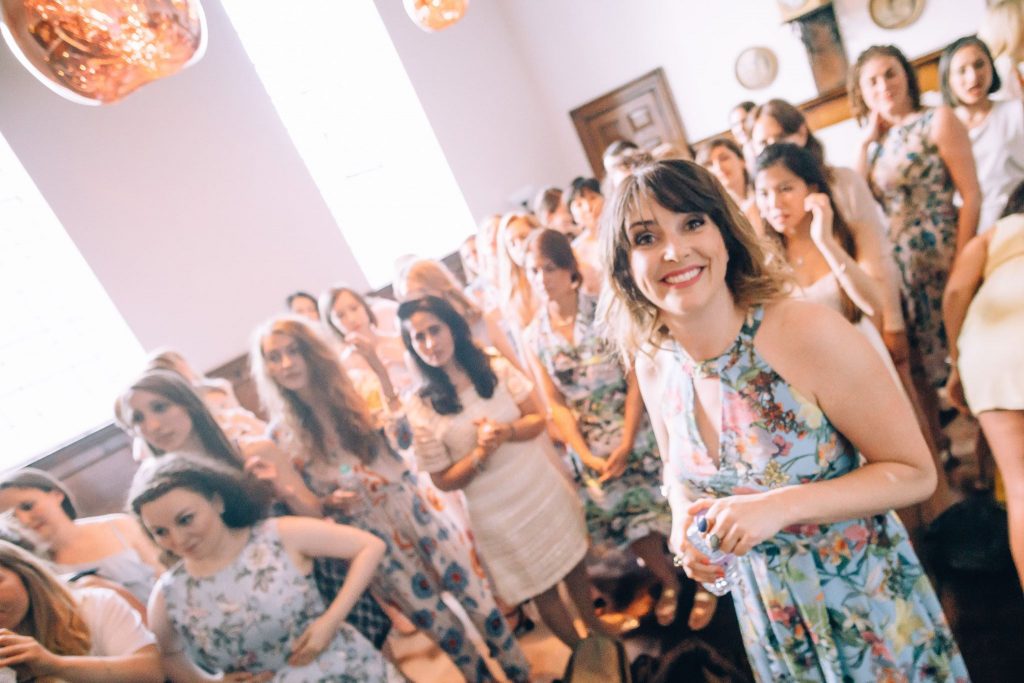 My love of music is certainly from my family. Everyone plays or sings, my grandparents sang in a small choir in Devon, I’ve been singing since I was tiny, and when my grandmother passed away, I wrote a Requiem for choir having never written for choir before. It sort of came to me and I’ve been arranging and singing with choirs ever since.

Inspiring passion in others gets me going. Seeing people get enjoyment out of what they do. If I can be even a small part of that, then it motivates me to try new things, come up with fresh material, challenge our boundaries. I love that music really does bring people together - it unleashes something very raw and powerful in both the choir and their audience. I’ve seen people having a really horrible time get lifted by singing with the Songbirds. It’s a family really.

Doing Pitch Battle as a group was so much fun, but also the most exhausting experience. We were there for three days and everyday the call time was 6.45am and we didn’t return to our hotel until gone 10pm. We would all do it again though!

We met some phenomenal people who taught us so much about what we are capable of. Deke Sharon really pushed us to perform in a way we haven’t previously and I think we are stronger and better for it.

The highlights are so many it is hard to list them. Chaka was lovely to us, we met her in the studio the day before the heat was filmed and she received a full Songbird group hug. It was so lovely for me to see some of my girls get to meet and sing with a real musical hero. I can’t give too much away but being able to open the show was a real compliment to us. I’ll never forget standing up there with the girls and being a part of that moment with them. It was genuinely one of the proudest moments of my life.

I think for me it was about seeing my Songbirds completely able to compete with choirs who are essentially professionals when we just rehearse for two hours a week. It makes me so unbelievably proud. I’m not ashamed to admit I had a few teary moments of pride to be onstage with them all.

It’s made me realise just how special this group are. We don’t audition, everyone is welcome and we are made up of amateur singers and yet we sang and danced alongside choirs and vocal groups with a lot more training and experience, and totally held our own. It’s made me want to take more performance opportunities with the group and continue to improve. When you’re a Songbird the sky really is the limit! 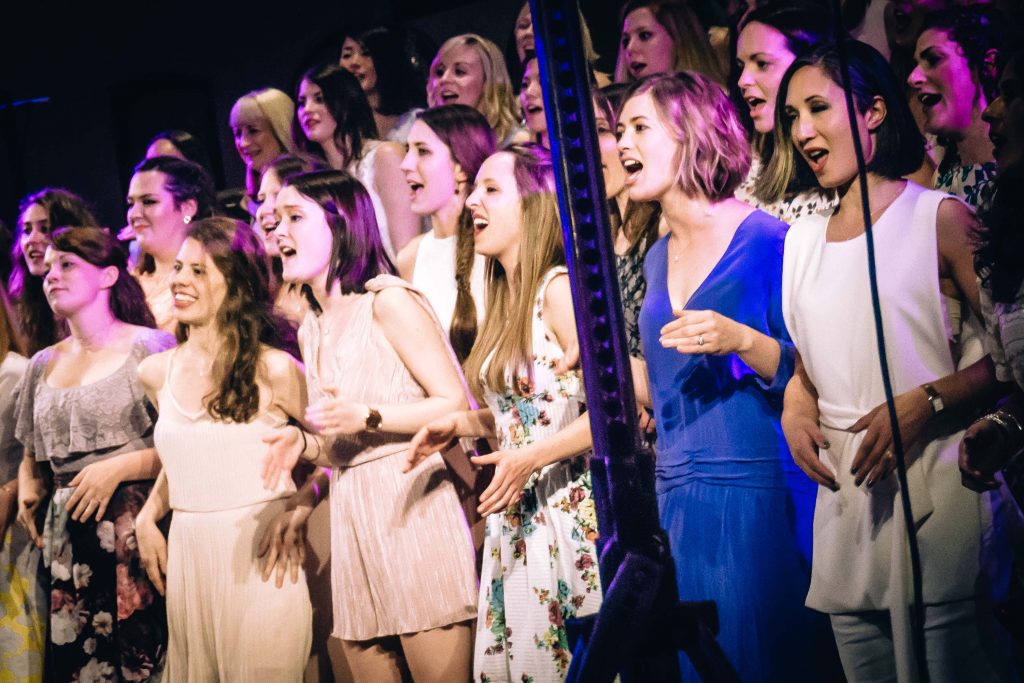 I grew up in a musical family, where myself and my siblings all reached grade 8 in our various instruments. I was always involved in orchestras and choirs throughout my childhood, constantly annoying my family by singing all the time! When I went to University in Durham I got involved in every college production going, and had an amazing time - I got the chance to sing lots of solos and develop my confidence. When I left uni, I was desperate to keep it up, and that's when I came across City Academy. That was about four years ago, and the rest is history!

Singing is one of my favourite things in the whole world - it makes me feel so happy, particularly when I share it with a group of amazing women. The power of group singing is massive! I feel like I belong to a real community. I look forward to rehearsals every week - if I'm having a good day it gets even better and if I'm feeling a bit stressed from work, it is the best antidote!

We've gone from strength to strength and grown massively, with so much new talent and energy coming in every term. I can’t imagine ever leaving the gang - we are such good friends, produce amazing harmonies and have a spirit that can’t be replicated anywhere else. I am inspired by every Songbird I spend my Thursdays with, and Kat Hare, who has created such a warm atmosphere, and helped us all to develop our skills and our confidence as performers. I have also seen it have a big impact on people’s confidence in general, because there is so much support and acceptance within the group.

Of course, we were all extremely excited on the coach up to film Pitch Battle, and seeing the studio for the first time certainly surpassed all expectations - so many lights and cameras! Wow, the whole experience was phenomenal! I couldn’t believe it when CHAKA KHAN gave ME a hug!! And we all felt like such celebs - fake lashes and hair extensions, customised clothing- what a more can a girl want!?

All the glamour aside though, a really special moment for me was during the dress rehearsal when we sang our solo. It was so raw, I could feel the emotions of the group and we produced such a moving performance that it brought a tear to my eye - it was a memorable musical experience for me. It’s our first (and hopefully not last) time doing anything like this - we have learnt a huge amount throughout the process about our vocal, choreography and performance skills, and have really come out the other side much improved, lots closer, and more confident as a group.

Keep up to date on developments on FB at facebook.com/CASongbirds, on Twitter at twitter.com/CASongbirds and on Instagram at instagram.com/casongbirds

If you'd like to join the Songbirds or one of our London choirs, see here >>>

Introducing celebrity and mens fashion photographer, and City Academy tutor Leigh Keily – we caught up with Leigh to find out…