Myrah Duckworth, a member of the City Academy Mentorship Programme writes about what Black History Month means to her.

I have been writing for over twenty five years now. Much of my early works ended up in a plastic box under my bed. One, because I didn’t know what else to do with them and two because I lacked the confidence to take a leap of faith to find out what to do with them. Once I had my children, I felt I should be a good role model for them and put my work out into the world. If nothing else but to potentially create a risidual or passive income stream for when they were older. As every artist knows, this isn’t always easy. Your work is like your baby. It is a precious piece of you, that you aren’t quite sure, if this often cruel world, will appreciate. In order to free yourself as an artist, you have to remember who you are creating for. Be that yourself, a niche group or an entire fan base.

I loved the scene in Bohemian Rhapsody where the music producer is adamant that this iconic song would never sell because he didn’t understand it. He bogs down on the classical language and the futuristic, varied artistic style. The awesome actor, Rami Malik who plays Freddie Mercury, wonderfully in my opinion, explains to him that the song wasn’t written for him. It was written for all of the Queen fans out in the world. He tells him in no uncertain terms, that in short, the fans will get it and that the fans will love it. And didn’t we just? I wouldn’t even call myself a Queen fan. “Sacramouch sacramouch. Will you do the Fandago?” Who would have thunk it?

I have continued to write. I have been brave enough to put my work out there and I have been confident enough to take the reject letters from publisher after publisher, who stated that my work wasn’t what they were looking for. So I did my research and the advice was often to go to a book shop, find a best selling book in your genre, see how it was written, write something similar and send it to that publisher because then you would know exactly what that publisher was looking for. Logically that made sense but creatively it was suicide. My brain’s left and right hemispheres started a full on boxing match and by the time I got to round three, I decided to simply put the writing back in the plastic box and push it back under the bed. Problem solved.

Then self-publishing became a thing. Not the self publishing where you paid thousands of pounds to print hundreds of copies of your book then use them to fall out with your family and friends because you expect them to buy a copy to support you but they don’t, so you use them to insulate your loft instead. I mean the self-publishing where you upload your completed file to a platform, choose a front cover, add your bio and voilà! Folks can order a copy of your work, any where in the world and the platform prints it and sends it to them directly all while you enjoy a well deserved night’s sleep. What’s not to love, right?

Out came the plastic box and the laptop and I spent much of my time trying to find the files I had written many, many moons before. I finally found them and I uploaded them all, back to back, one after the other. Low and behold it actually worked and I sold a few copies! I think I still do. I randomly see a few pennies in my account from Amazon. I smile sheepishly to myself and give gratitude. 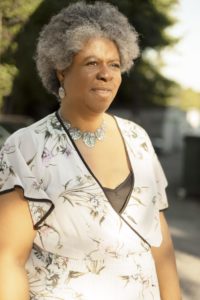 Firstly, I applied for the City Academy Mentorship Programme and I am beyond excited to have been choosen to take part and finally I have the support and network of people who recognise my creativity, determination and resilience.This fantastic programme is hosted by the outstanding international actor and creative guru, DeObia Oparei, who reminds me of the human embodiment of my favourite flower, the sunflower. He is everything and more of what I need in a mentor. For that I am grateful.

Secondly, I have had several opportunities to be an extra in the new up and coming TV drama for BBC/Netflix called Champion written by the amazing Candice Carty- Williams, author of the best selling novel Queenie. Not only that, I have met her on set. I spoke to her and I thanked her for being a trail-blazer. Candice is here right now. She looks like me. I follow her on instagram. She is turning her superb book about family dynamics and urban the urban music scene into a visual representation for screen. I am totally blown away. I have two pieces of writing I want to do that with from my collection called Browncherub’s Urban Tales: Jack and the Cash Stack and Cindy Ella. Candice has shown me that it is possible. I don’t yet know the exact route she took to reach that place but I’m on the correct path, that I do know. For that I am grateful.

Thirdly, my ten year old daughter wanted to go to Alton Towers for her tenth birthday as some sort of strange initiation into double digits. She wanted to show herself that she was a big girl now and could go on some of the more thrilling rides. Of course I had to step up and join her. We started gently and visited CBeebies Land. I was almost in tears of joy when I happened upon Gran Gran and Jo Jo’s interactive house as a theme park attraction. My mind was totally blown. It was absolutely fabulous. From the pictures on the wall to the homemade treat baking in the oven. The interactive sunflowers that you can help grow, to the digital devices where you can screentime Gran Gran, Jo Jo or Great Gran Gran. Incredible! Not only has the fantastic Laura Henry Allain MBE, written and published the series of books, it’s been made into an animated series for Cbeebies and she actually has a theme park attraction! Laura is here right now. She looks like me. I could never have imagined that being a possibility but now I can imagine it for my series called ‘Little Gems’. For that I am grateful.

For so many years, Black History Month has been a time when I have learned about the outstanding achievements of African Americans, from now and from the past. I have gone on to teach this in classrooms and to my three children, passing down this same age old knowledge. This year I can, not only celebrate black excellence in DeObia, Candice and Laura first hand but I can communicate with them in real time. They are here now. Trail-blazers, who have not only talked their talk but are walking their walk… right now. They are not just trail-blazing for me but for anyone who chooses to see them, recognise them and follow in their footsteps. For that I am grateful.

Whether you’ve been partner-dancing for  years or you’ve only just turned your hand to a new dance style, you may…