Member of City Academy's Ballroom Dance Company, Jon Turpin, told us about his experience dancing in the recent Winter Dance Showcase, and spoke to two of the other gents in the company about their dancing experiences, and how they found themselves lighting-up the stage at Trinity Laban...

I first started dancing when I was a student, and found the Bristol University Dancesport Team. We used to train for and take part in competitions around the country. When I left university almost ten years ago, I found it hard to find a ballroom dance class with a mix of interesting people and with teachers who understood that we dance to make friends and have fun as well as learn steps! At the City Academy Ballroom Company, we are taught some technique, but quickly get into learning formation routines which will form part of a showcase performance. The teachers make sure we dance with a variety of partners in each routine and everyone is very encouraging and helpful when you have any questions. It’s a friendly group of people and I quickly felt very welcome. The weekly practice has become the highlight of my week! 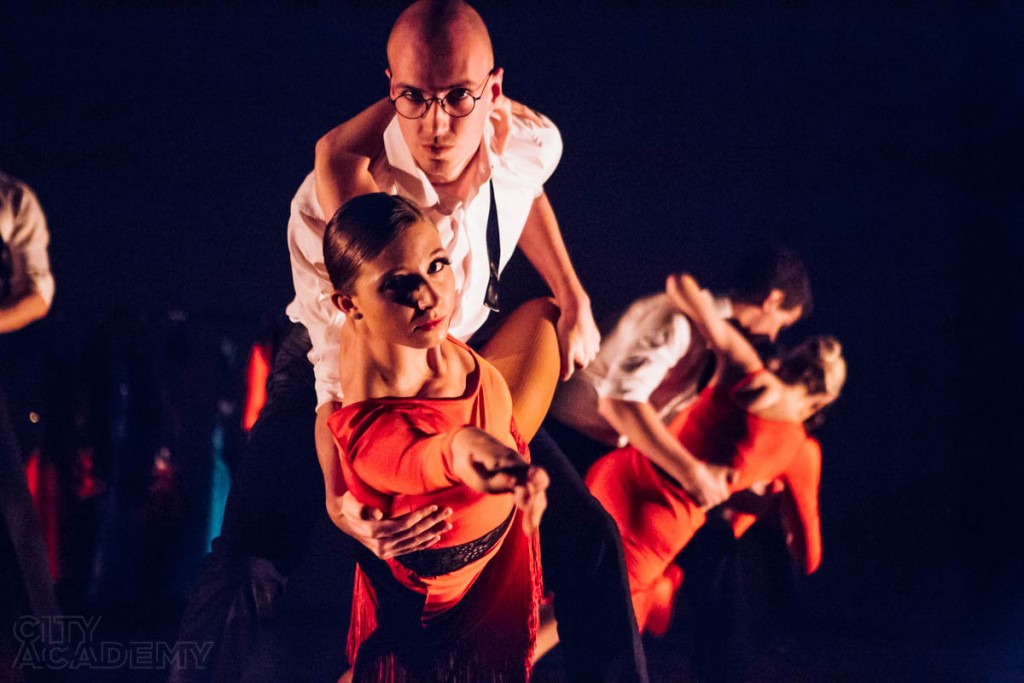 Jon with the Ballroom Company.

Working towards the Winter Showcase gave the company a clear focus and sense of purpose. We all had varying levels of experience and had strong motivation to help one another so that we
would all look great together. On show-night nerves were running high – knowing that our families and friends had paid to come and see us made us all really want to dance to the best of our ability. When the moment came to walk out on stage, we completed both routines as well as we ever had, and doing them on a stage with full lighting and sound was such a rush!

At the showcase, I had the chance to meet some of the families and friends of my fellow dancers, and this got me interested in finding out a little more about my fellow gents’ life/dance balance, how and why they started dancing ballroom and what performing in the showcase meant to them and the people who came to see them...

I have two boys under ten who thought it was quite funny that their daddy had joined a Ballroom Dance Company. That was until they saw me perform and now they tell all their friends about it...

I’d always been interested in dance but it was something that was limited to nights out and family functions. Then back in 2014 I had one of those moments where I thought to myself - "it’s now or never" - and I took the step and started looking for dance companies in London. I found City Academy through the web and I signed up for a 6-week Tango course and thoroughly enjoyed the experience!

I had one of those moments where I thought to myself it’s now or never...

I wanted to dance more, learn new styles of dance (and steps) and ultimately perform on stage, so once I finished Tango, I signed up to a Ballroom Course. Then I auditioned for the company, and I’ve not looked back.

I was initially apprehensive about joining, and it was all to do with whether or not I was experienced enough. I attended the audition and instantly the company leaders (Shawnna & Leo) put my mind at ease and encouraged me to treat it as a normal dance lesson - enjoy it and have fun. 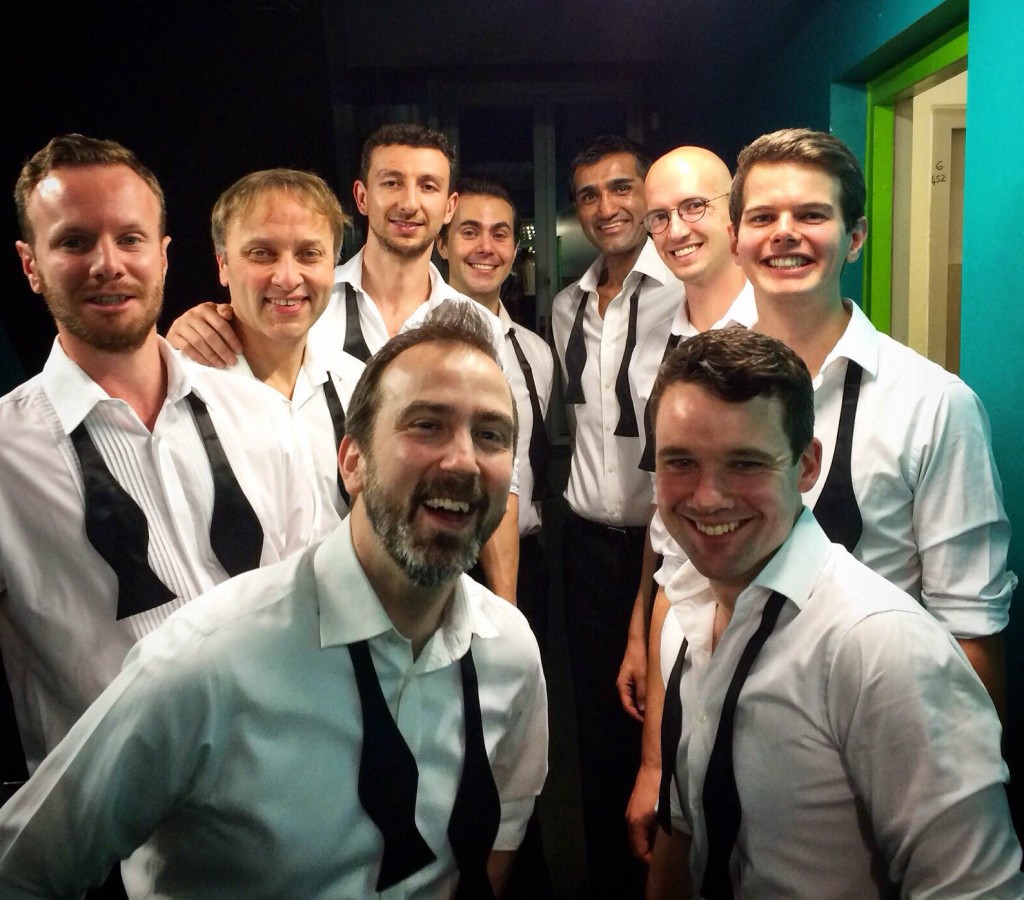 The boys backstage at the Dance Show

Ultimately as with all things in life, it comes down to people and their personalities and we're lucky to have a great group. However, it also comes down to the group's leadership.  Shawnna are Leo are always keen to share their experience and knowledge, as well as being extremely committed, and very passionate about what they do. They helped us create and perform in a show that we were all very proud of.

I still remember the energy we were all experiencing when we were called from our dressing rooms to take our place on the side of the stage, waiting to go on. It really was electric and I’d certainly not experienced anything like it before. Getting ourselves pumped up with high fives with the rest of the group. Last minute photographs (see left) to capture the moment and overall that sense of togetherness willing each other on to nail the performance and most importantly to enjoy it.

No one in my family had done anything quite like this before, and from the day I joined the group there were so many people interested in coming to watch. I’m sure that as the performance day grew closer they were intrigued to see what I had been doing for the last 3 months.

They loved it and I guess that’s the comment that anyone would expect from their family. But then a few of them opened up and actually said that they didn’t expect it to be that good. It was really impressive that the 2 routines were choreographed in such a short space of time and such contrasting routines as well – we performed a standard (Foxtrot) and a Latin (Cha Cha\Rumba) routine. They also said we all looked great, especially the ladies, we danced well as a team and also that the staging of the performance was really impressive and unexpected.

I could see from their faces that their comments really were genuine and I now find them talking to other people they know about it as well, which is really awesome because if others can get involved and have an experience similar to mine, I know that they will also never look back. 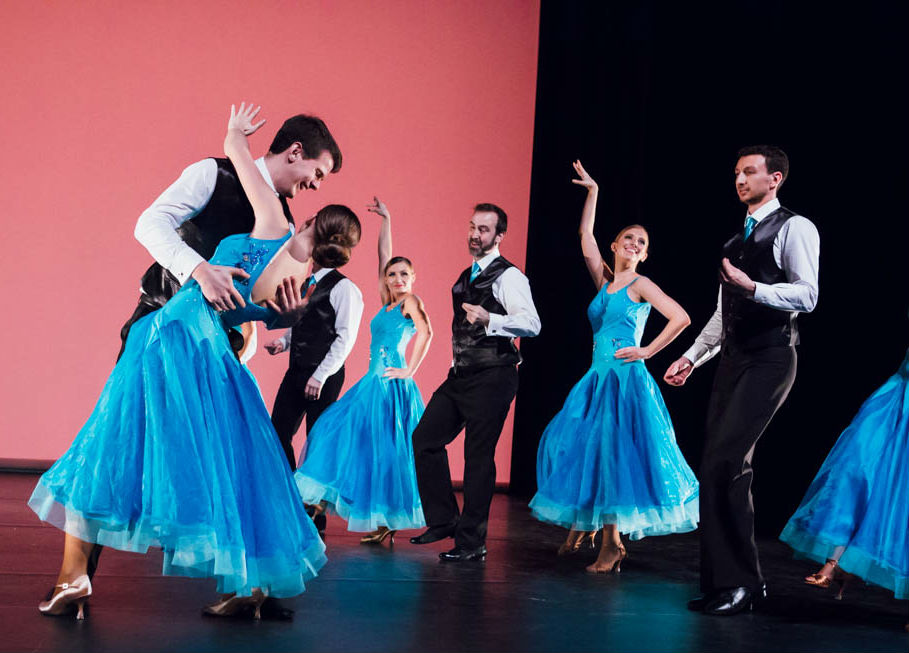 The Ballroom Company in action at The Winter Dance Show

I had never danced before I went to university. There was a girl I liked, and she asked if I danced, to which I obviously replied - "who doesn't!?" I ended up competing on the university student circuit, but stopped dancing when jobs and real life got in the way. I've only picked up dancing again in the last few years. I joined the Ballroom and Latin Dance Company after finishing City Academy's performance course.

I got to pretend to be James Bond!

I guess that, because I had danced before, I may not have had the typical fears of a chap joining a dance class, like embarrassment or fear of performing in front of people. I just hoped it would be fun to go to classes where you had a goal you were working towards. And it was!

It's sounds soppy to say, but my favourite part of being involved in the Dance Showcase was seeing the whole company come together and really perform to the best of our ability. It's not about who the best or worst dancer is, it's about putting on the best show we can for people who have paid to come and see us. The show was full of laughs, nerves and adrenalin. And I got to pretend to be James Bond!

My parents and some friends came to see me. My mum said we were the best, and she is definitely not biased...

The Ballroom Dance Company practise every Wednesday from 7.00pm - 9.00pm at Finsbury Town Hall. To join, email our Head of Dance via info@city-academy.com

Clara Stone, ex-ballerina and Head of Ballet/Contemporary at City Academy, looks into the interesting history of Arts Educational – one…