Folk music and World music crossover in our day and time, and hence it is difficult to come up with song selection that defines their vast array of sounds and textures. Folk & World Music seeks to redefine traditional music, and even more so, to blend different traditions into brand new sounds. Since I’ve moved to London, I have been blessed with meeting some of the world’s finest musicians, who simply refuse to adhere to culture or genre-specific rules.

My journey started as a student on my first week at Guildhall, where I was placed in a room with fellow colleagues, told to create four compositions from our pure imaginations, and experienced the most polyrhythmic, powerful music-making I have ever been a part of. I've found myself listening to Afro-Electro sounds, feeling the most fantastic vibes made by musical experimentalists. I’ve been to Folk gigs in the city and then some.

This list is the result of the years thereafter, and it is my pleasure to share it with you:

De Thelo Pia Na Xanarthis or 'I Don't Want You To Come Back Anymore' is a Greek song from the late 50s, composed and performed by Manolis Chiotis. He was a virtuoso player of the Bouzouki, inventing the four-course version of this low-pitched mandolin-like instrument, and famous for his collaborations with partner and signer, Mary Linda. This version has been remixed by Imam Baildi - a grassroots band from Athens that pays homage to old Greek music, recreating traditional sounds and bringing them to the international music scene.

Ase Me Na Bo or 'Let Me In' is a great collaboration between Athens-born Magda Giannikou (of Banda Magda), and world-renowned Jazz collective, Snarky Puppy. Trained in film scoring, and as fate would have it, having found an accordion at her grandmother's house, Magda's music captures the best of cinematic arranging and draws on an unchained musicality. This song is the perfect blend of Greek folklore over Jazz sounds.

A must for all Jazz lovers. Dianne Reeves is a highly virtuosic, Grammy-award winning American-Jazz and World Music singer and scat singer - a difficult technique that uses the voice as a wordless instrument, generating rhythms from ad lib nonsense-syllable riffs. Dianne is very well known for her ability to improvise and in particular, layer her African-American blues textures over Latin sounds to create a fresh and unique repertoire of fusion songs.

Afro Blue is a Jazz standard composed by Mongo Santamaría and first recorded in 1959. It has been adapted by multiple artists over time and is perhaps best known in its arrangement by John Coltrane. This version is sees Erykah Badu lend her talents to the genre. She is an artist and musical style all in her own right, but here she has teamed up with neo-soul artist Robert Glasper, and his band the Robert Glasper Experiment (an electronic act that defies genre norms) to give her soul-funk take on an Afro-Jazz classic.

Hailing from Cameroon, Richard Bona is probably one of the top bass players in the world, as well as being an incredible singer, songwriter and multi instrumentalist. Though this song is in Douala (one of Cameroon's 220 dialects), this is a personal favourite because the it is rich in vocal layers and harmonies, all set on top of a beautiful soundscape.

Souad Massi, of Algerian-French descent, has a fascinating story of transformation -from political activist to singer to freedom fighter. Her music displays Western influences such as rock, country or the Portuguese fado through the prominence of the acoustic guitar, but sometimes incorporates oriental influences by featuring instruments like the oud, African musical stylings and frequently, more than one singing language. Ghir Enta or 'No One But You' is the song that launched her career, where she spoke of her own hybrid identity. 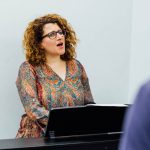 Originally from Greece, Lara Eidi is a singer, pianist, songwriter and arranger, performing in festivals around Europe and Lebanon. She's a passionate tutor with a holistic approach, and you can develop your singing skills by learning a vibrant repertoire on her Singing Lessons. She also teaches Singing - Beginners and Singing - Improvers at City Academy.

Justyna Sochaj is a contemporary dancer, community dance practitioner and dance teacher with a distinct passion for bringing dance to…