We met up with Songbirds choir member, Kristina Kokkini, who answered some of our questions…we discussed everything from feeling nervous before her first class to singing a solo in front of over 300 people.

Were you always been interested in singing and performing growing up?

I grew up in the lovely greenery that is Surrey. I’ve always been musical, I played the violin and drums as a kid and performed in a few shows at school and stagecoach. I was about 14 when I learnt to play the guitar and caught the bug for songwriting.

Did you have a background in dance or singing before City Academy?

When I was younger I attended Peggy Spencer’s dance classes every week at Fairfield Halls and loved it. But being an impressionable younger sister, I stopped when my sister stopped and it’s one of my biggest regrets. Not so much in singing. Truth be told, I’d never had a singing lesson before City Academy.

As well as learning and growing over the past few years I’ve also discovered friends for life.

Do you remember your first City Academy class? How did you feel before your first class?

I do actually, it was in September 2012 and I was doing a beginners course in Musical Theatre. Honestly, I was so nervous as it’s totally out of my comfort zone to be in a social situation where I don’t know anyone. I get really bad anxiety with it, but that’s one of the reasons why I decided to sign up for the course.

How has being in the choir and Musical Theatre Company changed your life?

Only for the better. Before the Musical Theatre Company and the Songbirds choir I had hardly any confidence in auditioning or performing solos and I had no idea how much I would actually enjoy the challenges put to me each week. As well as learning and growing over the past few years I’ve also discovered friends for life.

What was the first show you were involved in at City Academy?

The Witches of Eastwick. It was brilliant being able to experience the stage with my new friends. You spend six months working so hard together, supporting each other and helping each other out that you only want the best for each other come show weekend.

Kat’s trust in me and her encouragement for me to really push myself even if I go wrong has done wonders for my confidence.

What is the social side of the Songbirds and Musical Theatre Company like?

It’s so great! Every week after Musical Theatre Company and the Songbirds choir rehearsals we go to the local pub for a catch up and giggle but as well as that, some of us go to shows together, we meet for birthdays, we go out and support each other in shows.

I heard the Songbirds all have matching necklaces. How did this come about? And can we get one?

You heard correctly! Well one of the girls spotted it and suggested we give it as a present to Kat Hare aka the creator of the Songbirds last Christmas. We loved it so much that we all decided to get one (and another as a backup) I can’t possibly give any details about the necklace, you have to be a Songbird to find out. 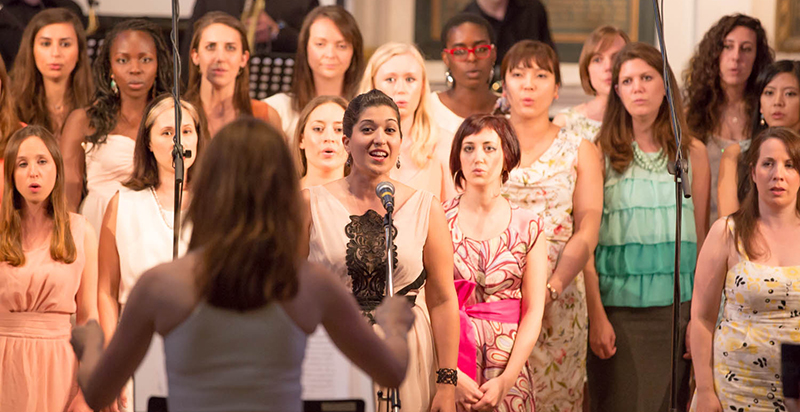 You’ve been taught by quite a few different tutors at City Academy. How would you describe them and what have they taught you?

Pippa O’Brien has such a way of making you feel like no question is ever too much, that you can have as much time to chat with her about songs/harmonies until you are comfortable and is forever encouraging and supportive if ever you’re in doubt. Her criticism is always constructive and she helps to find a solution rather then leaving you in the lurch and is incredibly loyal.

Rebecca Wicking is equally everything I’ve written above and from way back to Musical Theatre Beginners, has been one to make me push my boundaries and boost my confidence. Even if I do things wrong, I’m never made to feel terrible about it, she will run things step by step always with a smile for which I’m grateful for.

Kat Hare asking me to join the Songbirds has been one of the best bits of advice I’ve had in a long time. Being in a choir allows me to become vulnerable and out of my depth with the talent in the group. However, Kat’s trust in me and her encouragement for me to really push myself even if I go wrong has done wonders for my confidence. I would never have imagined I’d be able to sing/belt a solo to a room of 300+ people at our concert and it’s only down to Kat that I was able to do so.

Can you give us a couple of your favourite moments or anecdotes about a class or show?

Something I hear a lot in any class is “if you think you’re going to do something wrong, do it confidently!” and it’s a brilliant piece of advice. Of course the idea is to get everything right but once those stage lights come up and the adrenaline hits, who knows what’ll happen. One of my favourite moments is when I auditioned for Sally in Cabaret. I didn’t get the role but that audition was a break through audition for me and allowed me to perform in a way I never thought I’d have the confidence to. 6 months later I got the lead role for the Panto that year.

You’ve taken a lot of classes with us. What would you say to someone who was thinking of trying a class?

Get ready to have fun! Yes it’s hard work sometimes but it’s totally worth it. There’s so much support and great energy during any class, you’ll be back looking for the next challenge in no time.

Kristina is a member of the Songbirds Choir, find out more about them here, and find out about other singing options at City Academy here.
For more information about Musical Theatre classes and the Musical Theatre Company see here.

Photo highlights from our Singers choir Summer show, Only Natural, performed at St James Church on 14 June 2018.   Our…