Tom is back with a last chapter of The Acting Diaries: A Deviation in 2018. This time he has some hard decisions to make... 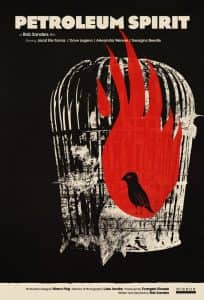 Working on Petroleum Spirit and Obsession: Dark Desires, was the only time in my acting career that I have been working on two projects simultaneously. It felt strange to me after a month off in America, where the acting game was left purposely on the sidelines. I never expected to be that busy over the summer and it just goes to prove that the unexpected always finds a way. The two characters had certain similarities; both of similar age, both grappling with misguided versions of masculinity, both struggling to find their identity as men, and both supremely nasty.

There were innate physical differences though; one was a tattoo adorned punk rocker from Boston, and the other an ex convict turned dodgy car mechanic with a gold tooth. I enjoyed getting to grips with the Boston accent for Dark Desires, spending a lot of time re-watching films like The Departed, The Fighter, and Good Will Hunting in my hotel room and going for walks in the countryside practicing to passing birds and trees, surely looking like the madman I was playing! I love immersing myself in a character that displays stark physical differences to myself. It's the challenge of mutating oneself to fit the requirements of a role that thrills me.

I remember looking at myself in the mirror after hair and make-up on the first day of Dark Desires; head freshly shaved, silver chains hanging loosely on my neck, a tight black vest and leather jacket, heavy Dr Martin's boots, and bold black eye liner completed the look. I was a different person and loved it. I felt like it gave me permission to play, and not apologise for making bold choices. I remember reading De Niro's biography, and he used to say that the clothes of the character defined a lot of his choices (a preference typical from an Adler trained actor), and this made perfect sense as I stared at myself in the mirror.

I felt that I really was Michael Cartier, the Boston punk rock enthusiast. A scene where this proved useful was an improvised section in a punk rock concert. The punk band were on the stage, the room was filled with goths and rockers, the lights were dim and the director walked me through the path that I was to take, weaving in and out of the crowd (interacting with extras where appropriate) and making my way to the bar, where I proceeded to grab a couple of drinks, down one and then take another to my girlfriend, and then head bang chaotically to the music.

It was to be shot all in one take, following my journey through the club. When you are faced with a scene that involves a lot of physical action and free movement, being completely sure of who your character is and how they would behave in particular circumstances is crucial. If you know this then you are free to play and respond in the moment; being sure of yourself and daring to take those risks is vital, and is all the more prevalent when faced with a logistically tough take.

I still had the residual feelings of temptation of joining the Armed Forces. In all honesty, being an actor is good and all that, however, you're in a constant 'no man's land' state, where being a character and delving into another's (albeit fictional) life is so addictive that when it's not there one struggles to find a sense of self.

This culminated in a meeting with my agent in a Soho coffee shop, which still remains vivid in my mind. We chatted about how his work was (busy, of course) and the projects I had filmed a couple of months ago, before I approached the subject of leaving the acting industry to pursue a career in the Royal Marines. To my surprise he said he saw it coming; "I had a feeling you were going to leave, but the Marines?!"

I explained it was a culmination of touring with The Two Worlds of Charlie F earlier in the year, and a need to have some sort of purpose and direction, and I believed that a career in the military would give me just that. To be fair to him he was positive and we ended the meeting with him saying "If you ever have a change of mind then just get in touch and we'll jump back on it." On the train home it felt like I had just ended a relationship, and I suppose in a way I had done. It was tough to do, but at the time I really believed this was the right thing to do.

The next five months were dedicated to training in rural Essex, back at my parent's house, and I went through the first selection steps; an interview, mental and physical tests, designed to start the culling process early on. I enjoyed the sense of drive and threw myself into some sort of path to physical perfection, as demanded by the Royal Marines tough entry tests.

Sometime around early March 2015 my acting coach and long term collaborator got in touch to ask if I would like to do one last showcase at the Hen and Chickens Theatre in Highbury. My automatic internal response was a resounding 'no,' but after ruminating on it, decided that it could be a really fitting end to my acting career, finishing at the place where it all started. After some rehearsals I was backstage again, preparing for a scene with an actor and dear friend that graduated with me in 2010 from our course at RCSSD. It felt somewhat emotional in a way. End of an era. I was due to go down to Lympstone two weeks after the show, and so this was a mixed sense of enjoyment, loss and saying goodbye to something that I truly loved. Right then Marines, let's be 'aving ya! Bring it on...

City Academy’s annual Christmas party is just one day away. This is our chance to celebrate the achievements of all…