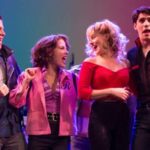 Learn choreography from the hit musical and film Grease.

Want to learn to dance to Grease?

Learn to dance to the hit musical and film, Grease, in our Online Grease West End Workshop.

With a catchy soundtrack based on early rock and roll, well known songs include Summer Nights, You’re the One That I Want, We Go Together, and of course, Greased Lightnin’.

Grease originally opened on Broadway in 1971 and became the longest running show of its time. Later it became an iconic film starring John Travolta and Olivia Newton John, which has been voted one of the top musicals of all time.

Dance choreography from the show
2

and receive feedback from a professional artist.

A note on participation: Enhancing these skills requires practical and active participation. As this is an interactive, group online musical theatre course all students will be required to have their videos turned on.

We will be publishing new class dates soon - please register your interest and we will be in touch with more information.

If you'd like to be added to the waiting list for 'Online Grease West End Workshop' fill in the form below and we will contact you if a space become available.