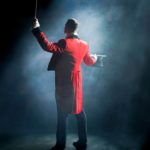 Join us for our singing and movement workshop inspired by the Greatest Showman.

It’s one of the most popular musicals on the silver screen and now you can join us for our one-day Online Greatest Showman Workshop inspired by the Greatest Showman. Come along and learn a song and dance to a piece from from the Film in a fun and supportive environment.

The Greatest Showman was released in 2017 and the songs from the film became an instant hit, featuring tracks such as This Is Me.

The day will start with a full vocal-warm up. You will be learning songs from the film, working as a group and adding harmonies. This a great online musical theatre workshop if you are confident singing in groups, but want to challenge yourself with the repertoire you are singing.

Some choreography from the hit film
2

Storytelling and acting through song
3

your creativity with tailored support in an encouraging virtual setting.
4

and receive feedback from a professional artist.

A note on participation: Enhancing these skills requires practical and active participation. As this is an interactive, group class all students will be required to have their videos turned on.

This is a fun and fulfilling workshop where you get the chance to learn songs from the musical. Basic technique for singing will not be covered, but the workshop is open to everyone.

If you'd like to be added to the waiting list for 'Online Greatest Showman Workshop' fill in the form below and we will contact you if a space become available.